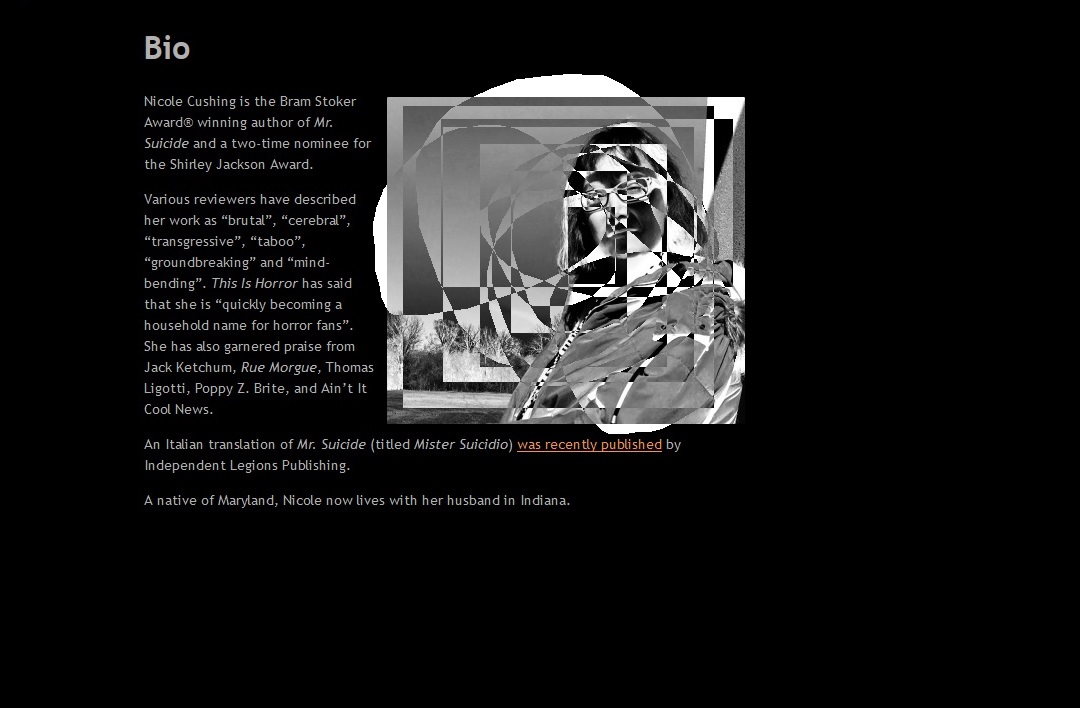 What are some of your most important aesthetic influences?

I enjoy the intermingling of beauty and ugliness. For example, using strong, polished prose to describe raw, grotesque imagery. One of the people who has served as an exemplar of this approach (albeit, in another medium) is the late Russian composer Alfred Schnittke.

My favorite piece of his is the Concerto Grosso No. 1–which effectively combines the dark with the playful, the somber and introspective with the giddy and outgoing, the tragic with the comic. It’s like listening to a beautiful, melting music box.

The ending of his Faust cantata has also exerted some influence. There’s an intensity, a gruesome feverishness at work there that I want to use in my own stories (particularly as I’ve really been focusing my work on horror for the past several years, rather than Bizarro).

When I was writing my horror novel Mr. Suicide I was mindful of Schnittke’s music and felt emboldened by it. I was so grateful for his example that I dedicated the book to his memory.

There are other aesthetic influences, too. (Mostly, other authors who have explored the transgressive or the grotesque.) Hermann Ungar (the almost-forgotten author of The Maimed). Hubert Selby, Jr. (the author of Last Exit to Brooklyn), too. But the composers, Schnittke and Shostakovich, are probably the most important influences in this regard.

What’s your view on fracking, if done by elbow?

That is a very silly question. Everyone knows I’m vehemently against it.

It was one thing when, a few years ago, the frackers relied solely on the elbows of those who had donated their bodies to science. That I could grudgingly accept. But it’s quite another thing for them to break into homes at three a.m. and forcibly take elbows from unwilling donors. Even if they do give their victims anesthesia, I say it’s wrong, Wrong, WRONG!

I’d have to be a real cunt to endorse an industry that leads to such monstrous consequences.

Would you like this interviewtf more if it had another title, like “No, Sir-iously,” or “’Have you explained your pupils to the cloud?’ I asked my ex-mom. But she was without vigor, she just stayed very calm and revised myhermy strangeness over and over again”?

I like “Have you explained your pupils to the cloud?”, for a couple of reasons.

First of all, I’ve long thought that some animals have pupils that desperately need explaining. Take goats, for example. They have the most fucked up pupils in the animal kingdom. If anyone (or anything, including a cloud) could explain to me–speaking plainly, without any caveats–why goats’ pupils are so fucked up, I’d be eternally grateful.

The other reason I like this title is that it sounds like a drug reference. I haven’t taken drugs in many, many years. And, even when I did drugs, I never did hard drugs. But I can’t help thinking that “Have you explained your pupils to the cloud?” might be the kind of thing that one crackhead would say to another.

You don’t have to be gay to find penises fascinating. The comedy „Superbad,“ for instance, features some funky dickophilia moments. What do you think about enhancing (or encocking) classic films the way you enhance (or encock) newsies? Oskar Schindler smoking a dickarette, for fuck’s sake?

Freud would say that Oskar Schindler is already smoking a dickarette, even if it’s not acknowledged as such. I’m sure Sigmund would be pleased to hear about your idea, though.

Spielberg probably would, too. Hollywood dislikes subtlety (and absolutely loathes ambiguity). So digitally replacing each phallic symbol with an actual image of a cock would breathe new life into many classic films by ensuring that no one in the audience would have to exert themselves trying to decode subtext.

What is the most (experimental) piece of art you’ve ever enjoyed?

Your ex-mom. She was one hell of a piece of art.

That all depends on what the frequency is, Kenneth.

Who/what is the biggest dick in the universe? Whose asshole would it fit perfectly?

We’re only seven questions into this interview and this is the second time penis has come up (no pun intended).

Why can’t we go back to talking about elbows? I did tell you, did I not, that corporations are stealing my neighbors’ elbows? Hold on for a moment … there’s something wrong in the kitchen. I just heard some noises in there …

So, you want to know who the biggest dick in the universe is? The dude who asks about dicks when elbow-thieves are afoot, that’s who!

One TED talk a day keeps the libido away. I mean, TED talks are certainly thought-provoking but they’re not in any way arousing. Not to me, at least. They’re about as unsexy as it gets.

Which role will (or should) male genitalia play in the far future – dick-hacking, ass-splicing, bio-junk, interstellar engineering?

The Earth will cease to exist.

Our sun will cease to exist.

So, I hope that answers every question you have about dicks.

I’m old. I can’t read what’s written on the tiles. It’s too small. Next question.

At which point does Bizarro become an unacceptable transgreßion?

When it’s slapped together too quickly–without skill, effort, and passion. When most of the author’s energy goes into crafting an ironic, hipster-bait premise instead of crafting a compelling character and telling their story.

Is it possible that music is totally overrated? Could one say the same about athlete’s dick?

I’m hesitant to say music is overrated. After all, Schopenhauer put music on a pedestal (which is really saying something, considering his generally low opinion of existence).

As for the athlete’s dick question … Well … I was going to refuse to answer it because we already established that dicks will be vanquished when our sun dies. Hence, there’s no future in them. Hence, who cares?

Since the athlete’s dick question relates directly to Schopenhauer (who I really love), I’ve decided to answer it.

So, I’d have to say that–yes–athlete’s dick is overrated. It killed one of the giants of philosophy, and yet people dismiss it as a mere nuisance. If that’s not “overrated”, I don’t know what is.

You know, I overhear men say, all the time, “Oh, that was back in the nineteenth century. We don’t have to worry about athlete’s dick today. We have modern antibiotics, blah blah blah …” In fact, among the decadent rich of New York City, contracting athlete’s dick has become something of a fad. They love the adventure of stealing shoes from passed-out winos and publicly masturbating into them. They think it makes them “edgy”. They mutter amongst themselves that they “feel so alive” afterwards. They gather for parties a few days later, strip naked, and compare their rashes. The redder and flakier and itchier the cock, the more “alive” the rich fuck claims he feels.

I know this is true. I saw it on the Internet. And I know the Internet isn’t one hundred percent reliable, but if you think about this story it doesn’t seem so unbelievable. It rings true, doesn’t it?

You see, a lot of wealthy people are dumb, so they have no idea that athlete’s dick killed Arthur Schopenhauer. (Actually, you can’t blame them. Lots of people don’t know that athlete’s dick killed Schopenhauer. It’s a fact that the history books and even Wikipedia have managed to suppress.) But … I’m digressing … the point is that the rich have conned themselves into thinking that contracting athlete’s dick is risk-free. They haven’t gotten the memo that the disease has mutated beyond the reach of antibiotics. Perhaps someone should tell them, but I say we should just let them keep thinking everything’s okay and watch ‘em drop like flies.

What would you rather have invented – the Ö or the 1?

I’ve never seen a Ö (with an umlaut) before. But I have seen a 1 before. (In fact, probably billions of times before.)

Why doesn’t the Canadian tech-metal band Martyr get the attention they deserve so much?

To be successful, Martyr should change their name to something even really dumb people can understand. Something like “The Fat Jesus Explosion” or “Hamburger God Tank”. The trick, I think, is to mash together the three things Americans find most appealing: Christianity, Food, and War.

They should have consulted me before naming their band. I could have saved them a lot of heartache.

How many spiders are needed to creep out one level-4 arachnophobe?

I didn’t know the answer to this question, so I filled three piñatas with spiders. The first had only ten spiders in it. The second had one hundred. The third had one thousand.

Then I put an advertisement in the paper, which said I was throwing a party for arachnophobic children. I specified that only level-4 kiddies were welcome. I promised “Fun and Surprises!”

Well, I was half-right.

I can’t really say much more about that, as this is the subject of pending litigation. I hope you’re happy your little “interviewtf” got me sued, Daniel!

I’m baffled. Am I supposed to fill in the blank and then answer the resulting question or merely gaze in awe at this Perfect Zen Koan?

I choose the latter.

Bonus question: What’s your take on the following 8 Nonsemes?

Never in my life will I be ashamed
of B.y.m.e.n.c.e.,
because I will be, now and forever,
a good friend of presbyopia.

You may be familiar with concept of the uncanny valley. It comes from the field of robotics. If a robot looks almost completely human, but is just slightly off, it is said to dwell in the “uncanny valley”. This is considered a poor outcome, because most people are greatly disturbed by robots residing in the uncanny valley and would never feel comfortable being around them. They’re just too creepy.

I mention this because the passages you just presented here (the six visible ones, at least) similarly reside in the uncanny valley. They approach complete resemblance to actual language, but are just slightly off. For this reason, perhaps, I find them … well, not truly disturbing … but a bit nagging. I feel like I should be able to make sense of them. Like I could make sense of them, if I just tried hard enough.

Here’s another reaction for you: reading those passages leaves me feeling like I must have just had a stroke. This makes sense, actually. I’ve been under quite a bit of stress. Recall, if you will, that my cat’s elbows have been swiped and it’s forced to crawl around the floor like a worm. That would be enough to give anyone a stroke.

Or perhaps those passages were written in some variant, future form of English. Perhaps it will make sense to readers five hundred years from now.

Perhaps you are a time traveler, Daniel.