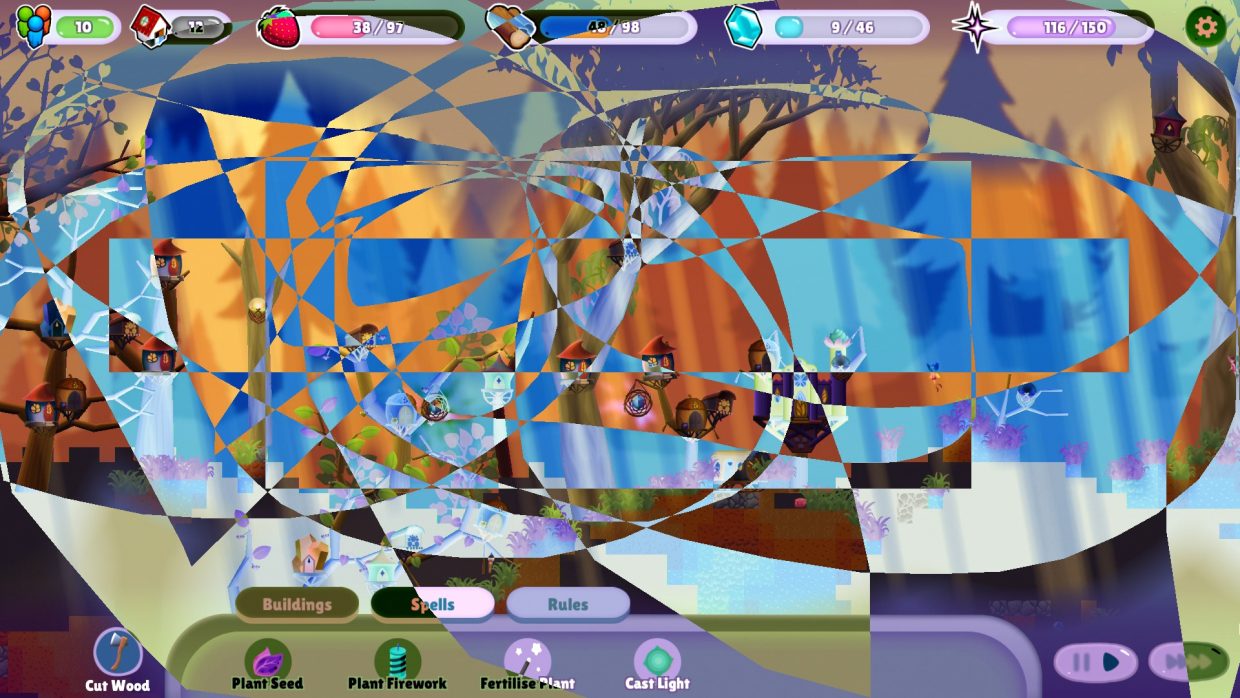 Craig Timpany is an indie game designer and programmer best known for making the faerie portions of Glittermitten Grove. He is currently awaiting extradition for inhumane pinball experiments.

I guess I’m supposed to passionately argue for games as art here, and maybe I would have if it was 2003 and this was Grand Text Auto, but frankly I’m now too apathetic about the world of High Art to argue for admission into the club. At least mass media has an audience, you know? Leave the question of “Is it Art?” to the people who care: investment fund managers.

There are definitely games where everyone on the team approached them as a purely commercial rather than creative exercise. For example, there’s a ton of clones on the Android app store that are the result of people actively suppressing their natural creativity. Wouldn’t creativity be an essential requirement for being art?

It’s crucial. There’s not much point in making something if it already exists.

This has a fully realised magical ecology and economy and uses it to produce an overall experience that’s like being a lich clawing at scraps of life force.

If you’ve ever told someone that if they find a job they love, they’ll never work a day in their life, then you should play this.

One of the inspirations for the final puzzle in FF2. Try to talk to aliens using an emoji keyboard.

I frequently see people saying video games are a young medium where everything is up for grabs, but I don’t think that’s true. Consider dual stick controls: there have been some high profile attempts to move past them like motion controls and the Steam Controller, but none of those attempts have stuck. It seems as ossified as steering wheels and gas pedals are.

The other thing is that Moore’s Law has provided huge opportunities for innovation, but Moore’s Law has failed. We were supposed to have 10 nm chips by now, but they’re late and 7 nm is looking even sketchier. There’s still gonna be price-performance advances in hardware, but it’ll come in the form of intermittent breakthroughs rather than steady progress. Granted, technological progress is not the only driver for evolution in games, but losing it will slow down change. I dunno, I hope Magic Leap finally ships their thing and makes me look like an idiot.

I think there’s a ton of room for improvement in tools. Twine was revolutionary because you can put together a game before the moment of inspiration fades. Hardly any tools have real-time collaboration à la Google Docs, and that would turn game jams into places where you can actually jam, in the musical sense.

“Glittermitten” could also be a slang expression for a “young, highly promiscuous woman,” right?

Is it!? I wonder what you’d make of the other title we considered: “Pixie Thicket.”

Without giving too much away, I think it’d be funny if an obscenity filter rewarded the player instead of punishing them.

I know this one’s not for me but a beetle is a very weird protagonist! It’s not relatable, it’s not glamorous. It doesn’t even have a face!